Going on Submission (Now With Scorpions)

The first rule of Sub Club is you do not talk about Sub Club. So there’s not as much out there about the process as there is about querying. While I was on sub, I know the posts other writers who’d gone through the process made about it were a lifeline for me, so I vowed I’d write my own once I was safely through that dark valley.

Here is that post. I’m not sure how actually helpful it is, per se, but I hope you enjoy it.

Congratulations! Your novel is going on submission! Are you excited? Are you SUPER EXCITED? Are you bouncing up and down because this could be it, and your novel could FINALLY be published?

You fool. You sweet summer child.

No, actually, really, you SHOULD be excited. Because this COULD be it! And you should be proud. You’ve made it so far, and you have a really awesome book. You’ve done a ton of work, your agent loves it, and you’re finally ready to BE THROWN INTO THE ARENA BLINDFOLDED WITH ONLY A TOOTHBRUSH TO DEFEND YOU FROM A DOZEN GIANT SCORPIONS—

Whoops, wait, no, it’s fine. It’s totally fine. It’s not like that at all.

Mostly, it’s not like that because you don’t even get to be in the arena. You’re sitting outside, nervously munching popcorn, with no idea AT ALL how your book baby is doing in there with that toothbrush fighting those scorpions.

(Also, I should say here that editors are not at all like scorpions, and actually are very nice people who love books and don’t want to crush your soul at all. It’s probably more accurate to imagine that arena is full of frolicking kittens. But that’s not nearly as dramatic, so we’re going with scorpions for now, and also, the point is you’re stuck outside the arena eating popcorn, so YOU DON’T EVEN KNOW. They could be unicorns. The arena could be empty. IT’S A MYSTERY.)

And here’s the thing. You sit there with your popcorn, and you wait.

The silence drives you crazy within hours, but unless you’re very lucky, you have to wait for months. And there is nothing you can do to make it go faster.

DO NOT TRY TO UNDERSTAND THE SILENCE. You will want it to mean something. You want its horrific eternity of torment to have some hidden signal or significance. Maybe you’re not hearing anything because the editors loved it and are getting more reads…Or maybe because they’re totally unenthused and put it at the bottom of their pile… Or because your agent doesn’t want to hurt your feelings… Or because THE GIANT SCORPIONS ATE YOUR AGENT OH NO WHAT IF SHE NEEDS RESCUING…

What you SHOULD be doing, everyone will tell you, is writing the next book. That way if your book is getting really tired fighting those scorpions, you’ll have fresh, maybe better-equipped reinforcements ready to throw in there.

But if you can’t manage that, go find something else to obsess about. Something that will consume your life. Buy a house, or have a really pressing work deadline, or get a puppy, or something. You want to be so distracted running around putting out fires (Hey! Maybe literally! You could become a firefighter! They get awesome hats!) that you forget you’re on sub, even for one brief, fleeting, precious moment now and then.

(Probably writing the next book is best. Do not use this blog post as an excuse to get a new puppy even though your spouse/mom/landlord says you can’t.) (Actually, puppies are awesome, so I’m not judging.)

Here is the secret. Here is the one and only thing the Silence means. Are you ready? Can you handle the deepest and most profound mystery of authordom?

That’s all. There is no deeper significance. It’s just slow.

Eventually, your agent will come by with a nice lemonade slushie and more popcorn and the halftime score. The score may be something simple, like SCORPIONS: 4, YOUR BOOK: 0. Or it may be more complex, with feedback or agonizing IT WAS SO CLOSE details like making it to acquisitions before facing the poisonous tail-barbs of defeat.

Suffice to say you’ll almost certainly get rejections first, and that’s totally NORMAL AND FINE. IT’S FINE. EVERYTHING IS FINE. Do you know why?

Because only one thing can end your journey toward publication. And that’s you giving up.

If not this book, the next book. If not that one, the one after that. YOU ARE AN UNSTOPPABLE FORCE. You’ve made it this far; you have to be.

Someday your agent will come back from the arena with a huge smile and good news about your book’s stunning victory. You will enter the arena at last, toothbrush held victoriously aloft. You will fight side by side with the scorpions (or kittens, or unicorns, or whatever they turn out to be), carrying your  book on to its next battle: publication. It will be AWESOME. Bring snacks.

I’m cheering you on in the stands.

The Best Birthday Present Ever

So I have to share my call story with you guys, because it was strange and wonderful and funny and involved bees. HUNDREDS OF ANGRY BEES. I am not making this up.

It all started on my birthday.

My awesome agent Naomi Davis called me, which basically gave me a heart attack right there, because usually we communicate by email so I knew SOMETHING was up. The conversation went a bit like this:

Naomi: So I just got a call from an editor who really likes your book and—

Me: (Flails) DID YOU KNOW IT’S MY BIRTHDAY?!

There was no offer yet; the editor had called to ask some questions like would I be okay with making the book Adult instead of YA (YES FINE IT WAS ON THE LINE ANYWAY TOTALLY COOL) and making it longer (SURE YES ABSOLUTELY I CAN DO THAT) and maybe a series (!!!!!!!!!!!!! HOLY CRAP HELL YEAH!!!!!!!!!!!!!!!).

And so Naomi and I were cautiously squeeing on the phone together, because clearly SOMETHING was going on, here. I was like OMG BEST BIRTHDAY PRESENT EVER (Okay, except maybe my first puppy, she was pretty amazing) and basically running around the house bumping into walls with excitement.

And then the waiting.

I kept my phone so close to me it’s a wonder I didn’t absorb it into my body through osmosis. We went out for my birthday dinner to my favorite local restaurant, and I just kept my phone there in line of sight because I MUST NOT MISS ANY CALLS. My brother called to wish me a happy birthday, and it was all I could do to not greet him with “You’re not my agent!”

The next morning, I wanted desperately to check in with Naomi, but I knew she’d have called me if there was any news. So I did what anyone would do: I came up with a completely fabricated excuse to send her an email asking about some minor detail of our phone call, and included a line about OMG THE WAITING IS KILLING ME EEEEEEEEEEEEE.

Naomi sent me back a short email containing the following fateful lines:

“Actually, I heard from the editor today. Are you around this evening for a followup phone call? I have to do a little bit of beekeeping this afternoon otherwise I’d call sooner.”

Here’s an actual exchange I had with my husband: 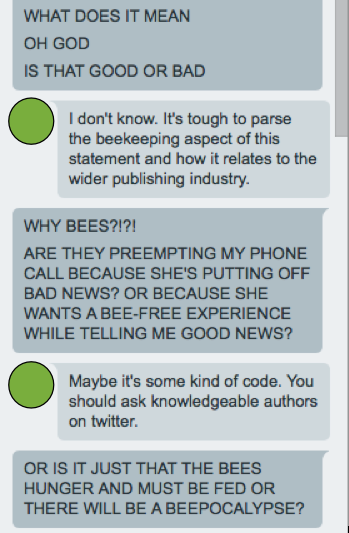 When I finally talked to my agent that night, she explained that she couldn’t call me earlier because she was splitting a hive, a process that apparently involves being surrounded by thousands of angry bees and sounds both delicate and badass.

But more to the point, she told me I had been offered an amazing book deal for a trilogy with Orbit, which is such an amazing publisher I just want to draw little hearts around their name every time I type it. (Can you imagine the little hearts for me? Good!)

I’m pretty sure there was swearing and squealing and a lot of incoherent noises. My kids were listening, and they knew this was the Big Call I’d been waiting for, and they were asking me if my book was going to be published, but I was listening to Naomi tell me the details, so I scrawled out the word TRILOGY on a scrap of paper and handed it to them. They thought it was hilarious watching me bounce up and down babbling like a loon about how happy I was for the rest of the night (and, oh, for the next several weeks).

And thus ends the story of the angry bees, the Best Birthday Present, and my dream come true.

May all your life’s fairy tales have as happy an ending!

Sooooooo… I have some news.

I have AWESOME news.

I am giddy with delight to announce (and I cannot believe I’m saying this and it’s true and this is really happening) that Orbit has acquired my fantasy novel, THE TETHERED MAGE, for publication in Fall 2017!

NO SERIOUSLY THIS IS A REAL THING THAT IS HAPPENING! HOLY CRAP!!!!!!!!

(I am being totally professional about this, as you can see.)

And you know what else? You know what? IT’S GOING TO BE A TRILOGY! So I really hope you like my book, because there’s going to be THREE OF IT! WHEEEEEEEEEEEEE!!!!

You guys, I can’t even tell you how happy I am. This has been my dream since I was literally five years old. And Orbit is an amazing publisher, and my editor (Lindsey Hall) is amazing, and my agent (the incredible Naomi Davis) is a goddess.

I am so far over the moon I can’t even SEE the moon from here. I’m past the Oort cloud in deep space. It’s crazy. I probably need some oxygen and I might die. OF JOY.