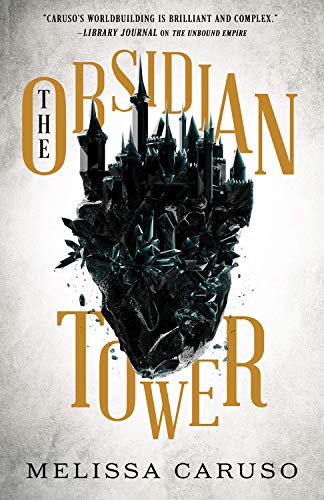 “Block out time to binge this can’t-stop story filled with danger and unexpected disaster. From the fresh take on time-honored tropes to a crunchy, intrigue filled story, The Obsidian Tower is a must-read for lovers of high fantasy.”
– C.L. Polk, author of World Fantasy Award-winner Witchmark

“Populated by a vibrant cast of characters and an intricate setting that’s practically a character itself, The Obsidian Tower deftly balances two of my favorite things: razor sharp politics and characters investigating weird, dark magic. A must read for all fantasy fans.”
– Emily A. Duncan, author of New York Times bestseller Wicked Saints

“A classic, breathtaking adventure brimful of dangerous magic, memorable characters and clever politics. This is a book that will thrill and delight any fantasy fan.”
–Tasha Suri, author of Empire of Sand

“The Obsidian Tower caught me on page one—a gritty heroine hemmed in by sticky politics and her own disastrous magic, a mystery of ancient lore and current rumor, and the most fascinating palace I’ve encountered in decades.”
– Carol Berg

“Full of magical and political intrigue, Caruso’s latest novel will surprise and delight fans and new readers alike. With rich worldbuilding, nuanced characters, and ratcheting tension, The Obsidian Tower is a fulfilling read from start to finish.”
— Tara Sim, author of Scavenge the Stars

“The Obsidian Tower is brimming with delights: gripping suspense, bombastic magic, political scheming, fascinating creatures, and ill-advised romance.  Yet what I love most is that at its heart, it is simply the story of a young woman opening herself up to the world and embracing her own potential.”
– Jon Skovron, author of The Ranger of Marzanna

“The intricate, colorful world is vividly described (“Gloamingard was really several castles caught in the act of devouring each other”) and anchored by the raw emotions of the diverse cast. Caruso’s new series is off to a promising start.”
— Publisher’s Weekly

(Complete and out now from Orbit Books!)

Praise for The Unbound Empire

“The Unbound Empire is a complex, compelling, stunningly satisfying conclusion to an excellent trilogy. I loved it.” — Liz Bourke, Tor.com

Praise for The Defiant Heir

“Takes the series to the next level in every way…. I absolutely loved The Defiant Heir.”
— Fantasy Book Cafe

Praise for The Tethered Mage

(Book One of Swords & Fire)

Shortlisted for a Gemmell Morningstar Award for best debut fantasy novel of 2017!

“The Tethered Mage is a riveting read, with delicious intrigue, captivating characters, and a brilliant magic system. I loved it from start to finish!”
— Sarah Beth Durst, author of The Queen of Blood

“One of the best new books I’ve read in years. I can’t wait for the sequel!”
— Vivian Shaw, author of Strange Practice

“The Tethered Mage is the best kind of fantasy: intricate world-building, the most intriguing of court intrigues, and a twisty plot. But while readers might pick it up for those elements, they’ll stay for the engaging characters and the unlikely friendships at the story’s heart.”
—Rosalyn Eves, author of Blood Rose Rebellion

“An enchanting voice and an original world you won’t want to leave.”
— RJ Barker, author of Age of Assassins

“Charming, intelligent, fast-moving, beautifully atmospheric, with a heroine and other characters whom I really liked as people. (I overstayed my lunch break in order to finish it.) I would love to read more set in this world.”
— Genevieve Cogman, author of The Invisible Library

“Caruso deploys a dizzying mix of politics, complex interpersonal relationships, and twisty plotting with an intensity that sets it apart in a crowded genre…an immensely engaging start to a welcome new series.”
— B&N Sci-Fi & Fantasy Blog